Updated versions of the engines already ported to Android is not enough for us, ELO gourmets, hungry for engine battles. That's why it's extremely exciting to see Gull 3 knocking on the door toward cellphones and tablets arena.

It's to remember that Jim Ablett's first attempts to compile it had failed and he had given up. Recently after a few months, the revenge is done, although it was not easy.

We have seen five builds as per user feedback based firstly on nodes per second display (still missing) and Jim has added Syzygy support on the go with rev3, something i personally don't need for Rapidroid. I skipped the second build which i consider not very significant.

Assuming that a sixth build will not come soon, i've conducted a closed tournament between the builds i've stored just to see which one performs better, without caring about the functionality of the features. I've simply said "Be the strongest survive!".

Using the first 10 openings of TCEC-7 and a quick time control of 180+1, the tournament didn't take too much time. I guess the result is representative for 900+2 time control of Rapoidroid, though i can never be totally sure. However, time matters... 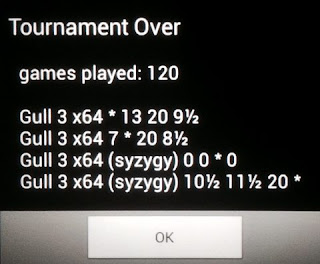 
Rev 4 seems to have a serious bug which makes it a whipping boy. Arithmetically rev1 is the winner here but i insisted on rev5 as the best choice for Rapidroid because:
* It won against rev1,
* It's supposed to support tablebases,
* It's the latest one...

Now i'll be waiting for the end of current gauntlets which will finalize the release of February list and then i'll take care of Gull and also Fritz 14.

I hope that next months will bring more competition to the Top-20 of Rapidroid.
Posted by Unknown at 2:04 AM