Following a visitor's comment, i've been checking a new chess GUI made available for Android. It's called Acid Ape Chess and regarding the highlights claimed by the developer, it can use not only UCI but also XB engines. It plays engine to engine games and accesses online tablebases as well. 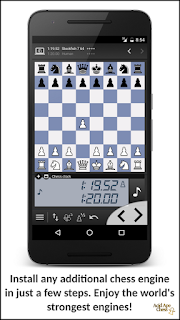 These are the main attractive features for me but there are many interesting others in the chef's menu. Since i didn't install it yet, any feedback from the testers is welcome.

"Acid Ape Chess is a chess application that combines online and engine play in a carefully designed, stylish and responsive user interface.

Acid Ape Chess is aimed at serious players. It will not explain you what the en passant rule is nor display a shiny 3D chessboard. Instead, Acid Ape Chess provides you with the best chess user experience available on Android.

Acid Ape Chess is 100% free: no in-app purchases, no advertisements.

• Play online on FICS/ICC, or offline against chess engines.
• Support for external UCI and CECP (aka. WinBoard/XBoard) chess engines, with pondering and adjustable strength.
• Two strong builtin engines are provided: Arasan (ranked #30 on CCRL 40/40, ELO 2980) and Cheng 4 (ranked #27 on CCRL 40/40, ELO 3024).
• Uses an online service to provide Syzygy 3-4-5-6 men endgame tablebases. The use of an online service is the only practical way to benefit from state-of-the-art endgame tablebases on a mobile device, as the complete Syzygy 3-4-5-6 set requires more than 1 TB of disk space.
• Engine-aided analysis with real-time best move display. When there are less than 7 pieces left on the board, the online Syzygy 3-4-5-6 men endgame tablebases are automatically queried, immediately providing you with the perfect solution of the game.
• Automatic analysis: in this mode, the best move is automatically applied every x seconds until a checkmate or draw position is reached.
• ECO opening information is displayed.
• A multi-page interface: multiple chessboards and utility pages can be opened simultaneously. You can for instance watch several tournament games concurrently, or analyze different variations. Pages can be switched by swiping left/right or by using the page list.
• Easy move list navigation with large previous/next buttons.
• A LCD chess clock modeled after real hardware, with sound and flag display.
• Non-disruptive in-game chat using a subwindow at the bottom of the chessboard.
• A scratch board for testing ideas and variations.
• A board editor for creating specific positions, which can be analyzed or played against an engine.
• A game database where all the games you have played or watched are saved. Saved games can be displayed, analyzed, or even replayed against an engine from any position. Moreover, you can view all the games you have played against a specific opponent.
• When a game starts, your personal record against your opponent is displayed. You can also view all the games you have played against that opponent.
• Copy/paste a FEN position.
• Copy/paste a PGN game.
• Load/save a PGN game.
• Edit variations, move annotations and comments.
• Watch live games from major professional tournaments.
• First-class support for many FICS/ICC features: list games and watch other games, list users, display user information, chat with a specific user or in public channels, edit finger notes.
• FICS/ICC timeseal support, for negating the effects of network lag.
• Premove support.
• Engine duels: have two engines fight eachother from the initial position or from any game position.
• Simuls: play simultaneous exhibitions against chess engines.
• Play any position against an engine.
• Zero disruption policy: the chessboard will never be obscured during a game. Never lose a rapid game again just because a dialog pops up at the worst possible time.
• Share your games on social networks or via email.
• Smooth move animations.""

Download Acid Ape Chess at Google Play: HERE
Posted by Unknown at 12:05 AM

Yeah, it's the very nice piece of software. The only thing holding me from using it is the lack of engine parameters settings, the same as with Chess Engines Play Analysis app. Otherwise Acid Ape Chess is very well made chess app, highly reccomend it.

Nice, yes you can install xb engines.. 1problem..it only allows xb engines with arm7??
but most xb engines are arm5..
At least on my device.
I wonder is there anyone else with the same problem?

You are right. Without access to the uci parameters, there's nothing serious remaining. Each engine comes with different default settings (hash, threads) which usually don't match the Android device capabilities. They must be set by the user.

I didn't check that. But in case only arm7 works, there will be only a few builds left. As you mention most of the xb compiles are very old and they were compiled for arm5.

It looks like Hawk Chess is the best software so far. It supports-> full access to the uci parameters, different opening book's (only .bin format).
But it doesn't support XB engines. :(

Indeed, very interesting app. I will test it.

My first impressions, Phalanx engine dosent working or I do something wrong :-(

Did you try both arm5 and arm7? Ron mentioned above that arm5 doesn't work but arm7 does.

I did a test with both versions,
Phalanx arm5 & arm7 but both were
not accepted.
Actually the only engine i got to work
is Scorpio arm7,but all the others failed.
For xb engines i stay with CFA.

Sorry guys, XB/WB engines are not supported by HC (Hawk chess).
Not yet, according to developer.

Support for engine settings was recently added in Acid Ape Chess. XB/WB compatibility has also been greatly improved (it now runs all the legacy engines I could find). This app is definately my favorite.

I have !!!! Marks every where when connecting to dgt board?

It is an awesome app for Android. I've been using it for more than a year, and really like it. I don't know about the UCI parameters others have spoken about, but one good point in its favor is that you can set it tune it down to play at a certain percentage of engine strength (which is the closest it comes to playing an opponent roughly your rating).

I've had hours of fun with it playing against Arasan Engine at 15% strength.

Just two minor gripes:
1. I wish it included a PGN editor, so I could save move comments / manual annotations to my games for future reference.
2. I'm not sure how practicable this is, but if you could also develop a light-weight web-based widget that could embed a PGN and replay it, that would be a lovely tool to showcase our games on our own blogs after we get clobbered by an engine!

Hi, will this app let me record a DTG eboard-game with another user - or is it only for user vs computer or user vs online?
I want to record my OTB games and export it to pgn/fen (for lichess study)

Unfortunately I don't have any experience with DGT eboard. Maybe another visitor can provide the blog with an answer.