It's good news that SSDF starts using more powerful Ryzen processor. However, one would strongly expect to see a current version of Stockfish here, instead of the rusty v6.

Komodo and Shredder were lucky Ryzenoids of this list, so they topped easily. 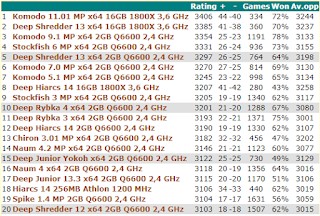 "We can now present the early results from the testing on our new hardware level - the AMD Ryzen 7 1800X, which is an 8-core processor at 3,6 GHz. We have opted for 16 GB RAM as standard on this hardware - compared to 2 GB on our older Q6600 hardware. Similar to the Q6600, we utilize a 64-bit OS for the testing. On our older hardware we had 5 piece Nalimov/Syzygy endgame databases as standard. On this new platform we have chosen to also add 6 piece Syzygy, installed on SSD, for the programs that are able to utilize it.

We started of by testing two programs which we already had tested on our older Q6600 level: Mark Uniackes Deep Hiarcs 14 and Stefan Meyer-Kahlens Deep Shredder 13. Deep Hiarcs 14 has reached the rating of 3207 after the first 280 games, while Deep Shredder 13 has a rating of 3385 after the first 360 games. The difference in rating between the Q6600 and 1800X are +17 and +88 points for these two programs. We will see what will happen as more games will be played.

Topping our list, 21 points above Deep Shredder 13, is Komodo 11.01, which we have tested on our 1800X hardware level. It's the first program on our ratinglist to break the 3400-mark and Komodo 11.01 has got a rating of 3406 after the first 334 games! Congratulations to Mark Lefler and Larry Kaufman for achieving this!

The fourth new entrant on the list is a very welcome comeback by the former Zarkov-programmer - John Stanback, with his latest program Wasp 2.01. We have started of by testing his program on our single processor, 32 bit hardware level, the A1200. After 200 games his latest program has reached a rating just shy of the 3000-mark by a mere 12 points. As it was released without any opening-book, we have used the free 'Perfect 2017' book by Sedat Canbaz. As Wasp is multi-processor capable, we will also test it on our other hardware levels for upcoming lists.

The last new entrant on our latest ratinglist is the manually tested, Millenium ChessGenius Pro dedicated chess computer. It is a faster version of the already tested Millenium ChessGenius chess computer, with more memory and an updated Modern opening book - which we have used for the testing. It was released in the autumn of 2016 by the company Millenium GmbH. It includes the program of Richard Lang and recieves its power from an ARM Cortex M4 processor running at a frequency of 120 MHz. After 100 games it has recieved a rating of 2180, which is a good 103 points more than its former version!

For the upcoming lists we will get some more games with the newest additions, but will also extend our testing on the 1800X with more programs. We have started the testing of Komodo 11.01 on our Q6600 level and Wasp 2.01 on our Q6600, and 1800X level. Hopefully we can also present a later Stockfish version on our upcoming list. For the next list we will most probably have enough games to be able to present the Chess Genius 3 for Android and possibly also the Revelation Ruffian 2.1 dedicated chess computer. We will shortly begin testing of the newest Millenium ChessGenius Exclusive computer, but as it takes some time to reach our limit of 100 manual testgames, it will most probably not have enough games before next year."

In case of trouble downloading from your PC, use your mobile device or refer to THIS POST.
Posted by Unknown at 5:52 PM