Texel 1.04 is released by Peter Österlund.

Peter announced an improvement of ~70 ELO over previous version 1.03.

As i'm more for Android than Windows about chess engines, i quickly downloaded the package here and started a bullet head to head between v1.03 and v1.04 using 1 second/move time control under Chess for Android GUI, as usual.

After a set of 100 games played with both sides of 50 typical openings of Chessbase Silver Opening Suite, i've found out the claimed improvement is similar on Android. Good. 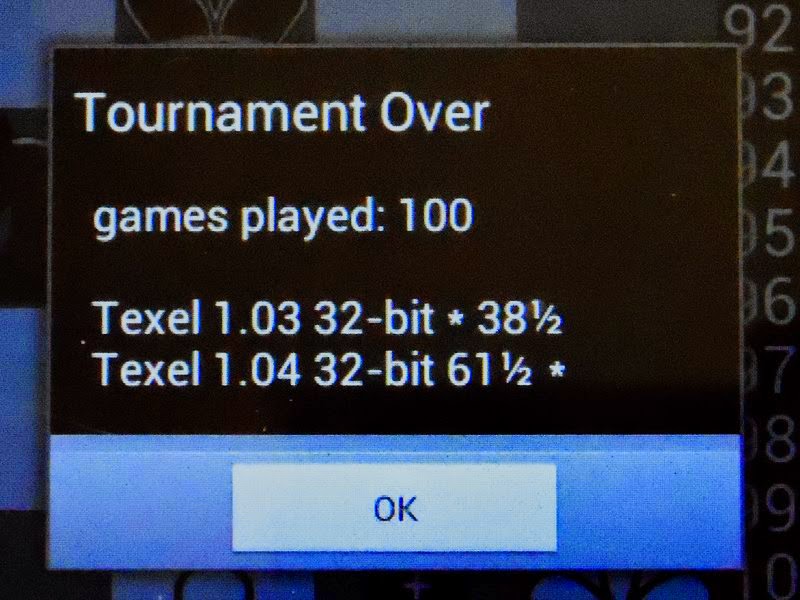 Therefore, the ELO improvement is calculated as +81 POINTS which looks highly remarkable, beyond one would expect from version numbers.

I've decided now to include the new version in my Blitzoid rating list. By definition, it will have to play exactly the same opponents as its predecessor from the beginning while other 89 engines stand by.

The only little disappointment i have with Texel is that multi-processing is still not available. Quad core cpu's like in my Galaxy Note II will only deliver 1/4 to 1/3 of their full performance unfortunately.

Texel 1.03 Android version on Galaxy Note II 1.6Ghz plays at 2556 ELO. It's the #8 engine among best versions only rating list.

The superfinal took 64 games to play of which 13 was won by Stockfish and 6 by Komodo. Remaining 45 games were drawn.

What we've come to witness in computer chess world now after TCEC Season-6 is out-of-the-standard and indeed a deep discussion area bearing in mind what has happened is against the basic professional vs amateur rule.

One would not expect that a totally free, open source engine crushes all other commercial programs like Komodo, Houdini and many others which are after all, "professional programs" designed and maintained since much longer time by pro people.

This is not seen is area like 3D design, engineering, video editing, graphics etc where no free program can compete with professional apps.

Thus, it's a new era and a difficult one for commercial chess programs but good news is that all chess freaks can enjoy being tortured by a 3200+ ELO chess player in front which asks no money but only your poor king.

Congratulations to Stockfish team and hundreds of people around the world who contributed to the evolution of the engine with lots of improvement ideas and testing support.

While playing first rapid games between several C64 chess programs, i wanted to conduct an experiment to verify whether extremely unfair time controls could help Colossus of 1985 resist a little bit against Stockfish DD Android.

As expected, the game didn't quickly turn into a miniature and lasted more than 40 moves. Colossus could even promote a pawn to queen just before being checkmated.

The oldie was awarded with 24 hours per game, allowing 500k to 1.5M nodes per move and 6 to 8 plies analysis depth. That's way i wanted to call this config Le Mans with a little sense of humour.

Of course, that definitely required the warp mode on Vice emulator, delivering a C64 running at 53 times faster than the original hardware.

Poor Stockfish was limited to the minimum possible time control of Droidfish GUI. The book was also limited to 5 moves.

Looking at the moves played, it's obvious that from 1985 to 2013, chess programming has progressed much beyond hardware improvements.

A post analysis of Colossus' moves, made by Stockfish at one minute time limit, as seen in below game record, revealed the bare truth that between weak engine and a strong one, only a few moves are different. However even a few moves below average are largely sufficient to push the victim into the darkest "no way out" tunnels which lead nowhere but to absolute death!

Long after my Blitzoid project started to get stabilized a little bit, i've recently went into a retro project combining all known Commodore64 chess programs.

Looks like two parallel projects are not enough for a mind addicted to chess and statistics at the same time.

Curiosity kills the cat but i'm not a cat and i can't stop myself from getting involved in a third parallel project in which many platforms will meet each other.

Even though the speed of blitz chess is attracting, longer time controls troll me all the time. Now i feel like being able to deal with a larger palette.

Therefore, the Rapidroid chess rating project can be launched with much harder testing conditions:
* Rapid chess time controls: New FIDE implementation of 15'+10" is the preference with alternatives like G30, 60/30 and 1/30 consecutively.
* Multi platform, covers all UCI/XB Android engines, all eligible standalone Android chess programs, iPod programs, oldies from DOS, C64, Amiga as well as tabletop chess computers. In short, any chess playing system other than Windows UCI/XB engines is in the scope.
* Own opening books allowed or external book support up to opponent's book move limit,
* Still no tablebases,
* No pondering (please, no).

Playing and recording games in this kind of project is often slow, too manual and time consuming. Therefore impossible to record hundreds of games per day. Naturally, wider range of applications and longer time controls require a pay-off one way or another. In my case, this means reduced accuracy due to less sample collection.

But not everything is simple and easy in life. Isn't it?

Now waiting for submission of the first results. Soon...
Posted by Unknown at 4:17 AM No comments: 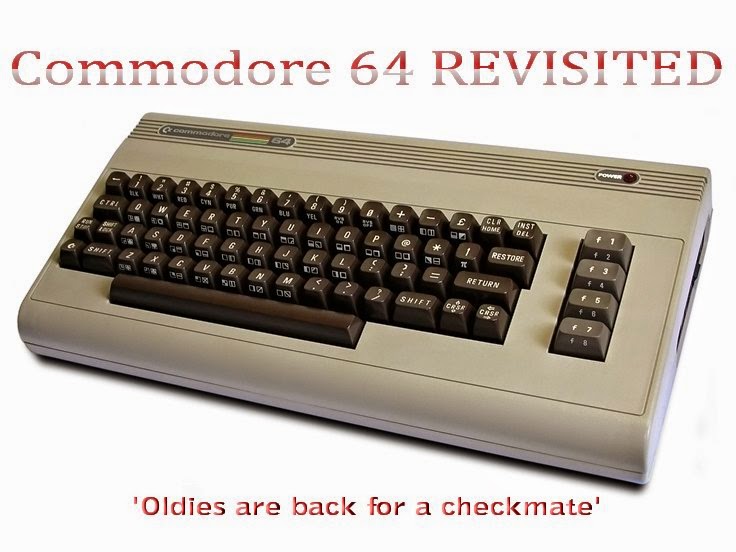 Here's another project to refresh our childhood memories.

Once there was no internet, no free engines, no daily updates, no multi cores but just chess programs we were searching all around to find a copy on tape!

That was the 80's when C64 was awesome as first computer experience. Having a chess partner always ready to play as many times as you want, whenever you want, was something so extraodinary for the young and willing amateur chess enthousiasts we were, some 30 years ago.

Each new program release added to our libraries used to taste like bitter chocolate during months. It's not shocking to see today's hyper threaded engine freaks hardly imagine this.

Therefore, i wanted to repeat a C64 experiment done before by other C64 freaks, but in a different manner. I can't deny the enourmous efforts made during these old tournaments managed by crazy people. But there may be an added value to reflect back and forth, after thousands of games and many rating measurements i've been generating on a single smartphone.

It would be also interesting to test how these programs which can only analyze 3 or 4 plies deep would stand against today's weak UCI engines rated 1200 to 1700. Kind of "Old Tigers vs New Kitties" tournament ???

At the bottom of the post lies the list of 22 available C64 chess programs, my old friends i've been calling back on duty since a while and their elo ratings based on previous tournaments. These elo ratings are not mine and can be easily found on sites like this fave of mine: www.spacious-mind.com

Now it's time to go for a rating competition, measurement, test, whatever you may call it and verify if a new approach will change the rankings.

In fact, it's not a round robin tournament at all. Briefly, games like 1600 elo vs 1000 elo seem like wasting time to me. Besides, this kind of large gap pairings distort the average of the opponents, resulting to a shrinking rating list with some amount of error. If all above facts are true, using previous elo ratings (be they accurate or not...) to directly focus on probably well balanced pairings should be the quickest way to hit the target.

So, here are the conditions:
* Time control: 30 sec/move setting that German colleagues call Activschach sounds suitable. There was no blitz clocks at the time the progs were written, so the alternatives, where applicable, may be 60m/30' or game in 30 mins.
* Ponder: This is the major change i will adopt. Pondering will not be enabled. When there's no option to dissable, the emulator can be paused to prevent deep thinking. It's a workaround which works unless you are in warp (turbo) mode.
* Device: I have no C64 anymore but VICE is a perfect emulator. Model setting must be NTSC and not PAL because due to VIC timing cycles, the clocks slow down by 20% in PAL mode, though the moves played are the same. Weird... This is an issue i could not understand in detail but after all, the NTSC mode is safe for accurate clock displays.
* PGN recorder: Winboard portable set to tiny board is excellent. Takes very little space on the screen.
* Speed: No WARP mode on emulator but 200% max. I've verified it's quick enough to follow and record the moves fluently.
* Pairing: It's not a tournament and the objective is to achieve quickly an accurate elo ranking. Thus, an alteration of swiss method suits well. This is done by allowing repeated pairings when there's no new opponent in 400 elo range while trying to maximize the number of opponents played. Each pair always plays at least twice with different colors.
* Duration: The number of rounds can be unlimited until elo changes stabilize in a narrow margin.

Stockfish seems pushing hard on the way to TCEC superfinal after winning Stage-3, three full points ahead of Komodo and Houdini of which one is very likely to be the other super finalist.

For those who want to see at what level each engine played during this stage (at least myself), i've calculated the elo performances as well, show below.

Therefore, latest Stockfish version which played in this stage reached 3268, based on these 28 games. Wow!

The dangerous followers, Komodo and Houdini are slightly behind the fish. They had never been that close to each other. It's impossible to guess which will perform better from now on.

The 4th qualified one is no more developed Critter. It has luckyly and surprisingly overcome Fire and Gull at the last moment and got to Stage-4 but there are very few chances to avoid sharing the painfull destiny of Shredder in Stage-4.

The old mighty Shredder was really the whipping boy this time and performed much lower than its previous level. This is partly related to recent updates of other engines which made them play stronger than their previous elo levels, as calculated and shown. 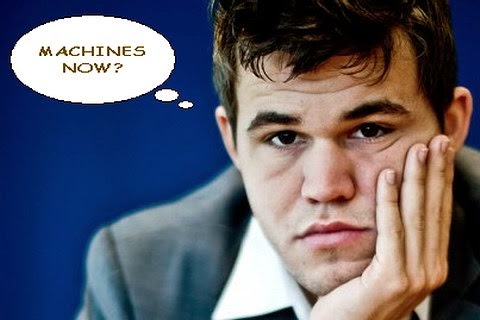 FIDE May-2014 rating lists show no big movements expect for Grishuk who climbed to third place, overtaking Anand. There's still noone close to world champ Carlsen. He will probably continue to occupy the top for a long time.