How to detect a clone engine 25 years ago?

I felt very happy when i find out 3D Scacchi Emulator, a new C64 program was available for download and i thought that adding another candidate to the ongoing retro tournament would be good. But it seemed to be a clone of MyChess II. 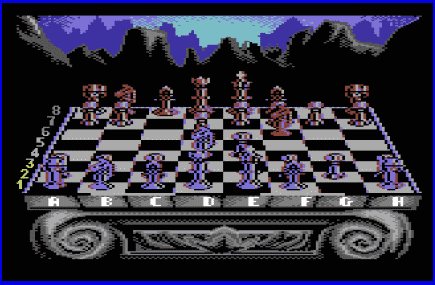 Today, many techniques to analyze and verify if a chess engine is the exact copy of another exist and they are scientifically reliable. Although this reminds me of the false (false for me after tons of articles i've read about it) accusations to Rybka followed by bans and title withdraws some years ago, i keep thinking this kind of precise comparisons can be accurately done if fairly adopted with good will.

But what you would do with something coming from the "stone age" of computer chess?

At first sight, 3D Scacchi looked nice and strong to me within the conditions of that era but it was said the engine is a copy of MyChess II. Ooops, disappointment!

The program was released in 1989, that's way after MyChess of 1984. Why those Italians would be willing to repack and probably pay a fee to Dave Kittinger for his engine of 5 years ago? Or was 3D Schacchi an illegal clone?

To check this out, i could find no other way than forcing both programs to play at the same time vs a third program (3 VICE emulator windows running at once...), at the same move timings, so that they can not go into different variations using their thought-ahead analysis made on my thinking time. Different moves should be only based on their evaluation differences, in case they are not the same engine.

The result, shown in attached screenshot, was convincing enough for me. They both played the same moves after same thinking times, move by move. Therefore, there was no added value of injecting 3D Scacchi into C64 Revisited experiment.

They think the same, they move the same

But if i was to make a more serious decision to ban or not this program or cancel its previous world championships (if any), i don't think i would easily do that, unless i am 100.00% sure of it.

As a dramatic case, some people did that to Rybka, number 1 chess engine of late 2000's. Rybka is abandoned and no more maintained since the verdict. That's why today, a highly potential engine is still missing from computer chess competition again the lonely topper Stockfish.

I think an updated and improved Rybka would be another color in the whole picture for sure, meaning more fun, for us, chess freaks.
Posted by Unknown at 3:32 AM

There are various versions of this program around.

Here's one from 1986, called "Scacchi 3D", which clearly states that the original is Mychess II.

The 1991 "3D Scacchi Simulator" has some added graphics, but engine and functionality remains the same.

In general, it appears that there was a market in Italy for games with new language, titles and (in this case) even some added graphics.