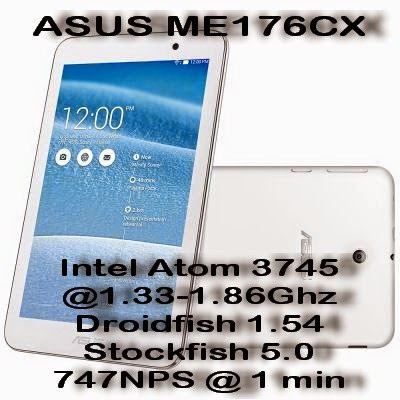 In a previous post i'd written about my disappointment as per a quick test conducted on Snapdragon cpu.

A couple of days ago, i've got a similar oppotunity to repeat the same test on a 7" Asus 176X tablet which uses an Intel Baytrail CPU running at 1.33GHz and boosting up to 1.86GHz, under Andoid.

This time, the result turned to be more convincing.

It's a quad-core SoC (System on A Chip) cpu named Atom 3745 as well. These series of cpu's were introduced for Windows first but now some versions manage Android too and wery well.

Regarding the test i've done, at the end of 1 minute analysis at the starting chess position, the average NPS level reached 747K using latest Droidfish 1.54 with Stockfish 5.0 engine. Of course, i'd set 4 cores and 64 MB hash before starting the test.

I really don't care how good or bad that Intel cpu performs with 3D games. But if we speak chess, it may be a good idea to invest for that tiny tablet because the price i've seen was very competititive, less than 200 USD.

At that attractive price, the only lag of this device seems to be its 1 GB of RAM which is limited for our memory hungry hash tables.
Posted by Unknown at 4:02 PM

I own a tablet with this cpu and run asmFish on it. The engine reaches speeds of 2000 nps in a middlegame position!