The build of Jun,26th is taken form CEPA3.7 while the other one, most recent one as of today is compiled by Peter Österlund.

Some testers reported than 160626 is stronger and criticized my decision, though there are exceptions like Nathanael Russell's tests which favoured the latest build. I admit that all reported results are valid in the conditions adopted. However, i've choosen to increase the timing a little bit more and also the number of games to play to dig the truth.

Regarding the results, here's the final screenshot by Chess for Android: 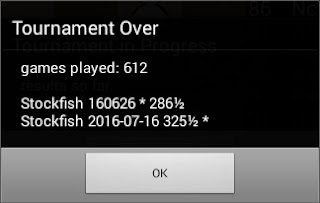 The gap calculated is 22 ELO vs an error margin of 14 ELO. I didn't attempt to calculate LOS but the experience tells the current result is enough to conclude. The latest build is OK.

The games compressed with 7z can be downloaded: HERE
Posted by Unknown at 1:00 PM

Provide us new development of stockfish20160802 for android.

This compilation has not yet appeared.

No. It is available. Wait for my post or go check new version of CEPA app.