Happy to see that SSDF featured SF8 instead of SF6, at last. The bad news, on the other hand, is that SF9 appeared shortly after SSDF update came in. Well, bad luck...

Another bad news is that Houdini is still completely missing, probably due to the fact that P.Houdart didn't want to lend a free copy of his program. This is not written anywhere, just my guess. 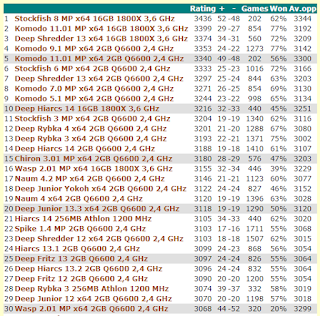 "On our latest ratinglist we have a new leader! It's the Stockfish 8-program by Tord Romstad, Marco Costalba and Joona Kiiski. As the program is released without an own book, we have used the free opening book from Fauzi Dabat, called "Aggressive 3.2 by Fauzi.abk". Even though it's early on, this strong combination has achieved an impressive rating of 3436 after the first 202 played games! This is 37 points above Komodo 11.01 on second place, but we will of course need to play more games to be able to shrink the error bars.

Another early bird is the Komodo 11.01-program by Larry Kaufman and Mark Lefler, which we introduced on our Ryzen-hardware last time around. We now have enough games to present an early rating for it on our Q6600-level. With a rating of 3340 after the first 202 games, it still trails its older 9.1 program by 13 points. This relationship will probably be readjusted for the next list as more games are played.

Since last time we have also included our formerly tested Wasp 2.01 by John Stanback on both the Q6600 and the Ryzen 1800X hardware. On our Q6600 it has reached a rating of 3068 after the first 320 games, and on the Ryzen hardware it has achieved a rating of 3155 after 446 games. As we also have tested it on our 32-bit, singlecore A1200-level, we can now compare it on three different levels. Judging from our testing, it seems like the difference is approximately 100 rating points per hardware level for this program.

You can download the latest SSDF list HERE or a copy of it HERE (*).
(*) P.S.: The file is labeled as Jan,18th. That's because the official release took 2 days.

In case of trouble downloading from your PC, use your mobile device or refer to THIS POST.
Posted by Unknown at 11:18 PM