Chess for Android 5.2.5 with new Modern and Russian piece sets 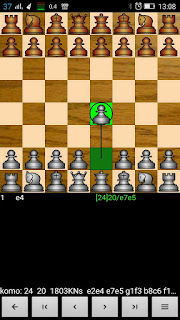 The new Modern and Russian sets will remind to most users the mobile version of Richard Lang's ChessGenius. It's not a coincidence because they are designed by Bryan Whitby, the same artist.

A notice from Bryan explains: "I initially designed both sets for Richard Lang's ChessGenius handheld computers. Richard still uses my original Modern set whilst Aart will use a slightly updated version. The Russian pieces were designed as an additional set for a recent ChessGenius update only Richard's are silver & black and Aart's are Brown & Silver."

Chess for Android is indeed more attractive with these new goodies.

Download latest version of Chess for Android from GOOGLE PLAY.

I have provided Aart with two sets not just my Russian but my Modern set also.
And maybe calling me Bryan instead of Whitby might have been more friendlier 😃
I use Chess for Android with my Solus auto sensory chess board that was designed by Berger my good friend and chess computer repair specialist. Details of his project can be found here. https://sites.google.com/site/bergersprojects/reedcb

Hi Bryan. You are absolutely right. I must have missed the modern set. The text and the post title should be complete now. And regarding friendship, i've got a lot :-) Best wishes.

Thanks Gurcan
Excellent blog site, I always visit it at least once a week.
Keep up the great work.
Regards
Bryan