Hawk Chess 1.1.2: A chess GUI both for the casual player and the pro 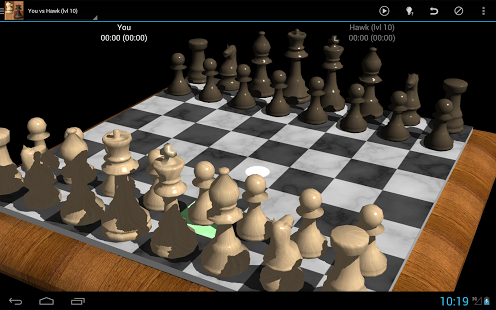 One of last month's nice surprises for me was Hawk Chess, a chess app very well balanced between nice looking and complex It targets not only the casual online players who prefer to play quick games with people on internet and have fun, but also the elo-maniacs interested in strongest engines for analysis, self-torture or engine games.

This app looks like satisfying both parties. If you know enough about GooglePlay community, you will understand how difficult is to achieve this. You respond to one part of users and others give you 1 star, unfairly.

This last feature is really amazing. After running the app for the first time and seeing how good the graphics are, i was not expecting this to work that flawlessly. I can't believe even the engine settings are available.

To be sure, i quickly ran some bullets between Fire, Stockfish and Komodo3 engines. They all worked fine, battled fine. Thumbs up for the engine implementation.

The PV and the scores are not shown the way we're used to see. No digital values, no algebraic moves either. But that doesn't matter at this stage for me.

Regarding the tournament play, i know it's too premature to expect it from such beautiful app. It's really an extreme feature targeting few users, but it should not be very difficult to include a code for batching engine games and stack the results into a specific PGN file. I've already written to the author about this and maybe he will be implementing things in time.

I didn't experiment any online game but user feedbacks are positive about it. Hawk is managing games via a chess server as usual and users are logging in to start play.

It's a paid app with a very reasonable price at GOOGLE PLAY. A piece worth buying.
Posted by Unknown at 2:01 AM