Must have tools for chess with Android 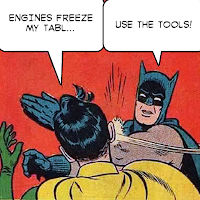 Referring to an expression i like very much which says "Better be late than sorry", my status here is a little bit paradoxal because i must say: "I'm late and i'm sorry too".

This is about three system utilities i always keep continously running in the background on all my Android devices during Rapidroid games.


Without these three muskeeters in place, i would feel blind and unsafe.

This tool shows the cpu temperature in the status bar and not in the notifications panel like many others do. The temp info is crucial and it must be visible on the status bar because pulling down the panel to read the temp needs a touch on the screen which is risky for me when two engines play chess, especially if case the GUI is Chess for Android. You simpy don't want to interrupt a tournament accidentally!

Another nice option is three temperatıre thresholds in Fahrenheit or Celcius and relevant colors fully customizable.

The app is free HERE as a tiny module which requires the installation of Xposed Framework to work. You need luck too because not all processors are equipped with temp sensor (Rockchip for example) or the app may simply not be compatible with yours.

Monitoring the running state of the cpu cores is as vital as checking the temperature. Nothing else can tell you whether a multi core engine is really using the expected number of cores. Another issue it comes to help is when an engine refuses to stop and exit when requested by the GUI. This is dangerous for any testing environment as the faulty engine remains running in the background and hogs one core or more depending the config. Once this occurs, in the next automated game, a multicore engine may start running without one of the cores vs a single core engine. This is simply unfair.

CpuStats freely available at Google Play, will help you figure out something goes wrong by showing the load of each core on-the-fly, every x seconds. Once again, the icon is pinned on the status bar and NOT in the notifications panel.

If monitoring the state of the cores is not enough (it's not enough of course), the app will show the current frequency as well, in readable numbers, next to the cpu load icon. This feature is extremely useful in case too much temp forces your cpu to throttle and your engines to play weaker.

If you think the temperature, the load and the frequency are enough, think again. What about the RAM usage when you try to allocate as much hash memory as possible to the engines? What about the memory eaten by tablebases? Monitoring current free RAM becomes even more crucial. That's where the third free tool, Memory Bar Simple comes to help. It has a nice icon to reside in the status bar showing the amount of free RAM in MB. Although it will show 999MB beyond 1GB free, that should not be a problem as we know enough free RAM is available for chess.
Posted by Unknown at 2:34 AM