Kasparov is back for some blitz

It's got nothing to do with computer chess except for a never-to-forget match he'd played against Deep Blue in 1997. Anyway, this news is something to be aware of for all chess lovers.

He retired on top and choosed to speak with statements rather than killer chess moves, so that no one could forget about him. I'm one of those who think he was way more succesful on the board while thinking about a miracle move rather than speaking around.

After a campaign for FIDE presidentship which failed at the end, he recently appeared for a blitz match vs his old rival and his later mate Nigel Short. He played much more in style beyond expectations and won 8.5 to 1.5! 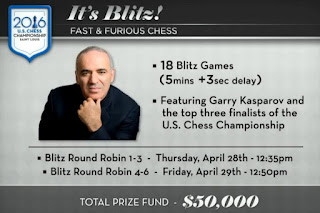 Now GK comes back for a more serious encounter against three strongest GMs of the US. Can he win this "human vs younger human" challenge?

Read more about it at Chessbase and the official tournament site.
Posted by Unknown at 1:05 AM

Hello Gurcan!
I confirm what says Alex: Chiron3 is available on the playstore since 01May 2016.
It's a paid engine (not very expensive:2,94€ for me on France).Once paid, you can installa it on several tablets; it's a top engine(Chiron2 3097 on ccrl, Chiron3 60 more points says the author; it's à multicore engine.
Something else: Rodin v8.0 has an Android buil uci+xboard ;unfortunately xboard hangs on CFA but uci mode works on CFA ans DF; i say unfortunately because Fermin Serrano says the engine is a little weaker in uci mode (uci in développement)
Congratulations for the work: your blog is essential for all Android chess fans!
Hervé