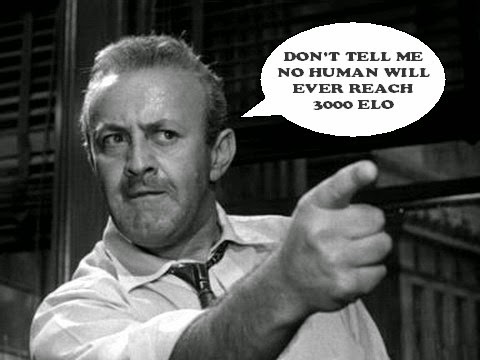 To compare or not ELO ratings of chess programs vs human ratings is a popular discussion topic in any chess forum. Some suggest separated populations present totally different distributions while some others defend 3000+ engines are really 3000+ because no human can dare to challenge computers since years.

It's obvious that human players faced big difficulties versus current top programs. Take Stockfish or Komodo, they both seem to be stronger than top human GMs. Remember Kasparov vs Deep Junior in 2003, Kramnik vs Deep Fritz in 2002 and lately Nakamura vs Stockfish.

Vishy Anand is also expressing sincere credits to computer programs often in interviews. How to deny the words of a former world champion?

One thing is for sure. Distributions are different in different rankings. Stating that Stockfish can be 3300 may not imply that a 2000 ELO engine selected from the same ranking overcomes a 1800 human player.

That means any 1800 ELO average player can try 1800 to 2200 ELO engines from CCRL's rankings to see if they are that difficult to crush or not.

The speculation will never get a concrete answer unless hundreds of human vs machine games are played and analyzed. I guess that will never occur and discussions will extend.

Regarding current facts to keep in mind:
* Top human Magnus Carlsen could never reach 2900, peaked 2889 only.
* Caruana played around 3300 during first 7 rounds of last year's Sinquefeld Cup.
* No human could ever beat a 3000+ machine in an OTB game in tournament conditions.
* As of today there are only 44 human players over 2700 ELO in the whole planet, only 1 over 2800.
Posted by Unknown at 11:28 PM

He's up and down around. At the time i wrote the post he was below. Doesnt matter too much anyway. He topped 2851 last year.

I beat a 2770 elo rated player on chessbase the other day :D

Can't rmember his name, and it was a bullet game, 1 min. Beat him though and wasn't the clock ;)