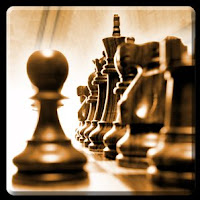 Rival Chess is an ancient app developed for other platforms before Android. The developer of the Android version is NetAdapt. After a long lasting hiatus, they recently updated it with many new features. I guess the new Rival deserves now to become a serious rival.

Rival Chess can be downloaded from GOOGLE PLAY.
Posted by Unknown at 10:25 AM