A stronger version of the mighty Gull finally comes to Android thanks to Jim Ablett. After a first porting attempt which failed, the second seems running well according to first testers. I didn't have yet the same opportunity but i hope there will be no issues about running it in automated tournaments, so that we can at last enjoy welcoming another ~3000 ELO portable engine into the ranking.

If you were to ask me why am i so excited about Gull 3, i'd tell you how sad and frustrating it was to see that even the abandoned old Critter can still remain number 3 in Rapidroid. That was the sign of a very slow progress in Android compared to overall progress speed of computer chess. 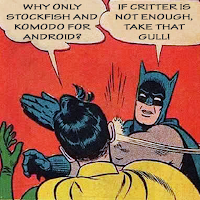 How many times we've been searching for Android ports of "others" like Houdini, Hiarcs, Deep Fritz, Nirvana, Naum, Junior, Spike? Inded, we never had enough competition vs Stocfkfish and Komodo as it was the case with several Windows engines.

Now it looks like a stronger Gull will bring some more fresh air. Enjoy it!

Download Gull 3 for Android arm7: HERE
Posted by Unknown at 12:29 AM

Alexei does it work with multi threads in your device? And what cpu do you have?

It works on all 4 cores on my Samsung Galaxy s3, but nps is quite low ~130knps in opening position, depth 18 after 1 minute.

On the other hand there is no nps displayed in Chess for Android, but I can see 18 moves ahead with 32 moves of selective search in opening position after 1 minute, so doesn't look so bad.

Thanks very much for your work Jim!!!