A match which is not supposed to draw as much attention as any Stockfish match has just validated that between two available builds of Ivanhoe for Android, 9.47c-beta plays better than 9.46b on a Rockchip 3188 quad core processor, using 180+1 time controls. And nothing more...

9.46b can run with 4 threads but uses only 1MB hash. It produced higher nodes per second than 9.47c which uses 1 thread + 256MB hash in fixed time benchmarks.

Initially i had seen no reason how a single thread version can overcome four threads with one third speed but that came true. Better algorythm? Better compile?

The conclusion is to replace 9.46b in Rapidroid by 9.47c and to expect that it recovers the ELO gap toward 2900, the typical expectation for Android.

For me as a tester in search of more competitors against Stockfish and Komodo, 9.47c is a new hope. 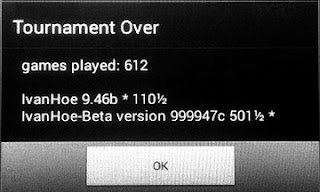 The games in PGN can be downloaded: HERE
Posted by Unknown at 10:30 AM

Congrats to 9.46b!
Shame I cannot get full from Ivanhoe's 4 cores, I quite enjoy it's playing style.
Though my Lollipop is a 32-bit version (not 64), it still manages to "cripple" 9.46b somehow.
It doesn't make sense for me to downgrade to KitKat 4.4.4 just for couple of engines (I'm sure there are more "Lollipop's victims" on my engine list).
...or maybe it's the time to learn compiling by myself ;)

Let me check my binaries. Something stupid here...

The stupid was myself. I blundered :-) During 612 games i was following the trend in reverse order because CfA lists the names as Ivan for both leading to confusion. Regarding the stats, they are two lines taken by Elostat file but they show the opponent, not the engine. So, reversed again.
9.47 is much better. Time to correct the post!

Haha, I knew there's something strange going on...:)
In this CfA's unability to display full engine names etc., I advice you to install free CoolTool app, apart from all other stats it will show the current most resource-hungry process on the statusbar, so you'll know exactly which engine is thinking at the moment, with full engine's process name :)

I checked again to verify how CfA manages the order. It's not the ID label sent by the engine but the name of the binary file and by alphabetical order. Though in the tourney i blundered, i should be correct because my binaries are sorted the same way. It was fully my human mistake.

Fritz looks good. Now 23-11 vs Ivanhoe. If Ivanhoe is 2900, Fritz maybe 3000+. I hope Gull is way beyond 3000. Just prenature speculations now. It will be very fun to me to introduce the newcomers in Rapidroid.

Seems like I wanted to bet too early, after more games Gull catched up with Fritz, I don't remember the result now, but was more towards drawish.
I'll better wait for Rapidroid results, much more organized :)
Also cannot wait for new SF Android compile (if there will be one), as I can see some nice progress in tests.

I a few days i'll be finishing with Stockfish 7, Crafty 25, Exchess 7.88, RedQueen and Phalanx updates and i will start with Gull, Fritz, Sting, Ivanhoe.