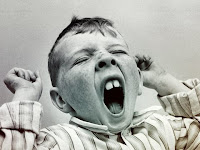 "Bonjour" means Hello in French usually. But the reason i'm saying this to myself today refers exactly to an alternative usage when you meet someone who has just waken up in the morning.

Yes, i just woke up to the fact that Fritz 14 engine bundled with Chessbase Online for Android can be used under CfA and Droidfish. It can even play tournament games under CfA. And besides, it plays Fischer clock games too. Quite impressing!

I'd purchased Chessbase a few weeks ago. After a little practice it was clear to me that the app is handy for loading and analyzing games but it disappointed with missing clocks. Chessbase does not use any timing and runs the UCI engines until a user interruption. Only infinite analysis mode.

Somehow, i didn't notice any OEX engine added to the engine list of CfA. What triggered my attention lately was a user comment published here in this blog. It suggested that Deep Fritz is working with CfA. What? Really? How?

I checked my engine list in CfA again. Nothing...

But the addicted mind can't give up easily. I've navigated into to the root of my tablet to find a folder dedicated to Chessbase app. Here it is! And a lib folder disclosed what i was looking for, as seen in below screenshot: 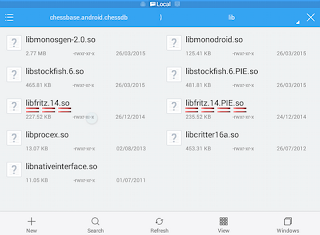 The two underlined files are the engine binaries. Usually it's possible to copy them to the home folder, rename them and install as new engine from CfA. I did so and the practice met the theory.

The engine can use up to 8 threads and 2GB hash. I choose 4 threads and 256MB hash. Done! A quick test of 1 minute thinking shows 500+ knps and all 4 cores are running. Perfecto!

Next step is a timed game using 180+1 vs a single thread engine strong enough to cope with Fritz. Robbolitto is a good option.

And finally, the happy end shown below is quite attractive for Rapidroid. I just can't wait to push Fritz forward into the burning arena of the mobile engines. 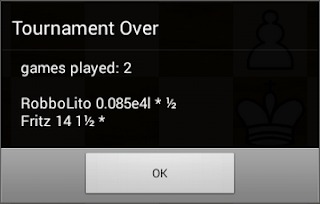 Repeating the whole thing with Droidfish requires similar steps. You just have to place the binary in UCI folder of Droidfish and select it through the "manage engines" menu.

Finally, i can't not upload any binary to the repository since the engine is not freely distributable. I don't even know whether it would work that way, without the app installed. The simplest way to run Fritz under Android is to buy the Chessbase app HERE.
Posted by Unknown at 5:24 PM

I have verified: Uninstalling Chessbase and reinstalling the so file as a standalone engine is working. The engine doesn't seem to require the app installation. Next time i'll check what happens on a device which has never hosted Chessbase.

Great idea, thanks Gurcan. I bought the app, a reasonnable price to get a good engine (Pandix family). Adding a .. tag in CFA's engs.xml with the path to chessbase lib libfritz.14.so also does the job without any copying of files. All 3 engines (Fritz, Stockfish and Critter) in the lib directory are discovered and "linked" as available services for CFA. Curiously, Stockfish-6 provided by Chessbase appears as Stocfish3 in the list. Fritz is named df14. The .PIE.so are also prompted by CFA as import-able but cannot be used. I had the idea to add the xml tag, as this is the way my CFA linked the Komodo 8 engine without any local file copied. This had been done by the install process of the Komodo app.
KR

Your findings are correct. By the way, the implementation seems to be done without good care. Especially the engine names... I've prefered to proceed manually to read Fritz14 on my engine list in CfA, afrer E, before G :-)

I hereby confirm that on a device where Chessbase was never installed, the engine binary can be installed as a standalone engine. It works without problem with full power and all features after importing.