I've been waiting since long ago to see that day. Now it's done. At least started...

Rapidroid is an experiment i'd invented in order to remedy the lack of serious chess engine rankings dedicated to Android, the way it's being done since decades for PC programs. However, no matter how accurate it becomes, the fun remains limited if you concentrate it to a single platform.

I believe multiplatform lists are more fun. Even SSDF, after all these recent top engines missing, is still a reference. You like it or not but you can't look elsewhere to see how comparable perform mobile programs vs PC's vs tabletops of the past etc.

Well, okay, but where is Android in SSDF? Nope...

To stop repeating the same question, i'd decided in the very beginning, to introduce a few PC engines as trustable anchors and besides these, especially as much retro programs as i can. I never had the opportunity. And recently in 2015 Jim Ablett compiles have taken away the first spare time chance.

After 8 months of wait, i finally said "Ok. I won't wait anymore and i'll do it right here right now!". The first one i'm finally injecting into Rapidroid is hereby COLOSSUS 4.0, released exactly 30 years ago, acknowledged as the strongest Commodore-64 program ever. 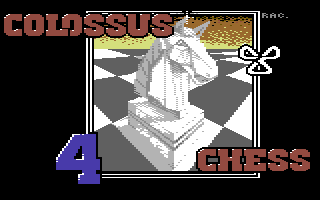 One funny micro-experiment of last year is to remember here. That was Colossus running at 24 hours per game vs Stockfish DD at 15 seconds per game, thus the most unbalanced settings in order to favor the oldie goody against the current World #1. The odds ratio was 24*60*60 / 15 = 5760 times more time for Colossus. Time heals many things but can't recover 30 years. As expected, the two games hadn't last even 50 moves. Paralyzed superchild had easily overcome the turbocharged grand grandfather.

Today, i played 4 games using two different Colossus configurations: One at 100X this time (more and more turbocharge please) and another with usual equal time control vs the weakest Android engine available, which is OliveChess. Olive looks like under 800 ELO, a great tool for all of us to achieve a victory against a computer in chess. Lol.

100X of Colossus might be equivalent to log (100) / log (2) * 60 = almost 400 ELO more, using the very rough and speculative formula. Since i expect standard Colossus to play 1300 ELO, can i expect then 1700 ELO at 100X? Although i strongly doubt about this but we'll see the difference in future Rapidroid lists thanks to the introduction of both configs.

Makes too much paragraphs for my poor fingers. Let's better take a look at the first games vs OliveChess, specially choosen to let Colossus with a victory. Colossus played on VICE emulator while Olive was running on a tablet with Rockchip 3066 dual core processor. For Olive, single, dual, quad cores don't count and only GHz matters. It's a single core engine.