Stockfish on an iPhone 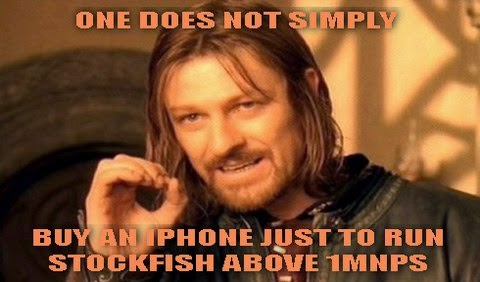 I personnally hate iPhone as a smartphone for several reasons. But if i was to admire it, that'd be because of the impressive performance of Stockfish engine on it.

In contrast to ARM based cpu's, widely used on most Android devices, iPhone cpu's use 64KB internal L1 cache which is obsiously boosting any chess program. Chess likes L1 cache very much!

Regarding ARM cpu's, the L1 cache is usually 32KB. If you like Qualcomm's Snapdragon series, let me tell you it's only 16KB. If we talk chess, Snapdragons are true bottlenecks. No matter how high is the frequency, it's almost impossible for a Snapdragon to catch 1.5MNps, which is usual for a recent iPhone.

Even the older 5S i'm currently obliged to use (company cellphone!) easily hits 1MNps in my hands.

After all, if you ask me whether i would an iPhone over an Android, i tell you chess is not everything and i say again "Noooo way!".
Posted by Unknown at 5:44 PM