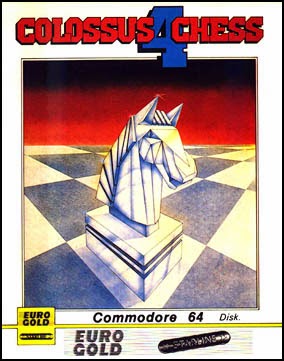 You think it's a joke? Yes and no. I had not foreseen a Commodore-64 program from 1985 to be the first non-Android to appear on Rapidroid ratings. Though the idea looks weird and stupid at first sight, it may be interesting to find out if it can still find an opponent to play after so long time.

Colossus was my first serious computer rival in late 80's after Grand Master which had quickly became my whipping boy in no more than 30 games. Colossus, in contrast, was not that easy for me to beat and it has remained the best chess memory of my childhood. I still remember Chessmaster 2000 too but Colossus was unique with a lot of professional features.

Today is 2015 and it's possible to have Colossus running almost hundred times faster than on a C64, using warp setting in WinVICE emulator, thanks to Intel Core i7. Therefore, it won't be foolish to give a try with it face to the recent engines below 1500 ELO.

So, stay tuned for a pleasant retro-chess encounter to be included in Rapidroid very soon. Now you wanna guess how high Colossus Turbo can reach 30 years after its birth?
Posted by Unknown at 12:54 AM

Martin Bryant released Colossus 2007a, Colossus 2008a, ... too ;-) http://en.wikipedia.org/wiki/Colossus_Chess
But it's a nice experience to play Colossus4-C64 against weak engines of today :-)